Booking.com expected to be back in Turkey

In my latest post I've summarized two cases related to booking.com in Turkey. One of the cases which was related to a court verdict prevented the online booking company to serve to Turkish customers in Turkey.

However, according to the latest news, Booking.com is expected to resume business in Turkey following complying with required rules and paying the relevant fees.

I hope it will back in business before the summer plans. :)

Uber and Booking.com in Turkey

Uber, which entered into the Turkish market in 2014, works as a platform providing only taxi call (UberTaxi) and pricier transport services (UberXL). Until 2017 Uber used to offer on-demand car services as an alternative to licensed taxis. However, due to regulatory acts of the administration services apart from UberXL and UberTaxi, Uber is no longer allowed to provide its original business model that is built on on-demand car services as an alternative to licensed taxis. On the other hand, taxi owners are also protesting the UberXL, despite its higher prices compared to taxis, claiming that they abuse their transportation license, which is allowing only non-tariff group transportation on pre-determined route, and avoid paying taxes.

As a court has ordered Booking.com's activities in Turkey to stop it seems that the company is hopeful for the trial on 23 October. But before that trial, let me summarize the court and antitrust cases regarding booking.com, which generally confuse people.

Despite some news resources mistaken it, the TCA case and the court case about booking.com are two, unrelated actions – the former was an administrative fine following an antitrust complaint; the latter was a judicial verdict following a complaint about “unfair competition”.

o The TCA case: In January 2017 the company had been fined approximately 2.5 million Turkish Lira by the Turkish Competition Authority following the investigation conducted in order to determine whether Turkish Competition Law was violated by the “best price guarantee” ( which also named as Most Favored Nation MFN / Most Favored Customer-MCN in literature) practices within the framework of the booking services provided by Booking.com B.V. and by Bookingdotcom Destek Hizmetleri Limited Şirketi, operating as the Turkish representative of the former undertaking. In the reasoned decision the wide application of MFN on hotels by booking.com was regarded as breach of the article 4 of the The Act No:4054 on the Protection of Competition. In the decision, the booking.com gave commitments to narrow the MFN clauses.

o The court case was about the verdict of a Turkish court about a case brought by the Association of Turkish Travel Agencies (TÜRSAB) claiming that booking.com was carrying out unjust competition against travel agencies and not complying with the Turkish law.. The court imposed an interim injunction ordering the Information and Communication Technologies Authority (the official regulator of internet and commination industries) to stop the booking.com activities. Currently, booking.com is not serving the Turkish customers to bookin within in Turkey. But the website is working for the foreigners looking for rooms in Turkey and for the Turks trying to book abroad.
at October 19, 2017 No comments:

I’ve published a post about the two critical investigations launched by the TCA in electric industry regarding abuse of dominance by leading electricity suppliers: Enerjisa and C(L)K.

Well, yesterday a press release (in Turkish) was issued by the TCA about a new investigation on Bereket Enerji Group - an important electricity supplier like Enerjisa and CLK.

According to the press release, the TCA examines whether or not it has abused of its dominance in the market through hindering competing power retailers and preventing the customers from switching suppliers – which is quite similar to other two investigations on Enerjisa and CLK. This is the third investigation which specifically focuses on the problems in consumer switching and the obstacles in path of the liberalization of the industry. It seems that the coming months will show us the approach of the TCA to the problems within the competitive structure of the electricity retail market.

The customer switches in the liberalized part of the market were regarded as "low" by the TCA Market Study in 2015. A good summary is here.

For a good overview of the Turkish electricity market liberalization story, my previous post is here.
at March 17, 2017 No comments:

Google under Antitrust Investigation in Turkey


Last month the TCA launched an antitrust investigation on Google. Although the related preliminary investigation had been closed by the authority, the administrative court suspended this decision and pointed that an investigation should have been conducted. Thus the competition enforcer of Turkey initiated this investigation in order to determine whether the articles 4 and 6* of the Act no 4054 were violated by the practices of Google concerning the provision of mobile operating systems and mobile applications and services, as well as by the agreements concluded between the web giant and original equipment manufacturers. 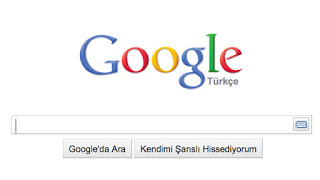 The NYT says, that:

the investigation in Turkey is the latest legal problem for Google, which faces three separate competition charges in Europe and has already been found to breach antitrust legislation in Russia. United States officials have also investigated the company over its Android and search services, but they have not brought a case.


The official press release is here.

*Article 4 of the Act no 4054 prohibits anti-competitive agreements and concerted practices between undertakings, while article 6 prohibits abuses of dominant position.
at March 07, 2017 No comments:

Diageo's Turkish subsidiary and the largest alcoholic beverage producer in Turkey, Mey İçki San. Ve Tic. A.Ş., was fined by the TCA approx. USD 45 million for abuse of dominance in Rakı market through exclusionary conducts. It is also required to renew its contracts with the resellers removing loyalty rebates and limiting its recommended shelf area clauses to only 70% of the area designated to Raki products within the stores. 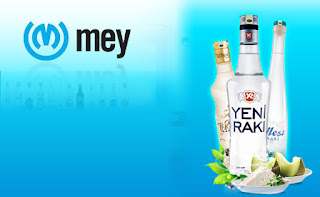 This decision, which concluded one of the highest fines in the TCA’s case history, is a very important step for a better competition in Raki (Turkish signature alcoholic drink) market in Turkey.

The official press release is here (in Turkish)

"The capital funding of a company is made up of two components: debt and equity. Lenders and equity holders each expect a certain return on the funds or capital they have provided. The cost of capital is the expected return to equity owners (or shareholders) and to debtholders, so WACC tells us the return that both stakeholders - equity owners and lenders - can expect. WACC, in other words, represents the investor's opportunity cost of taking on the risk of putting money into a company.
To understand WACC, think of a company as a bag of money. The money in the bag comes from two sources: debt and equity. Money from business operations is not a third source because, after paying for debt, any cash left over that is not returned to shareholders in the form of dividends is kept in the bag on behalf of shareholders. If debt holders require a 10% return on their investment and shareholders require a 20% return, then, on average, projects funded by the bag of money will have to return 15% to satisfy debt and equity holders. The 15% is the WACC.
If the only money the bag held was $50 from debtholders and $50 from shareholders, and the company invested $100 in a project, to meet expectations the project would have to return $5 a year to debtholders and $10 a year to shareholders. This would require a total return of $15 a year, or a 15% WACC.

Investors use WACC as a tool to decide whether to invest. The WACC represents the minimum rate of return at which a company produces value for its investors. Let's say a company produces a return of 20% and has a WACC of 11%. That means that for every dollar the company invests into capital, the company is creating nine cents of value. By contrast, if the company's return is less than WACC, the company is shedding value, which indicates that investors should put their money elsewhere.

WACC is, naturally, a key figure in investments in the energy industry. There is a nice report by Deloitte that gives insights about the different WACC estimations in the World and Europe in energy industry with specific WACC figure estimations for some major energy companies. Here is a shot from the report: 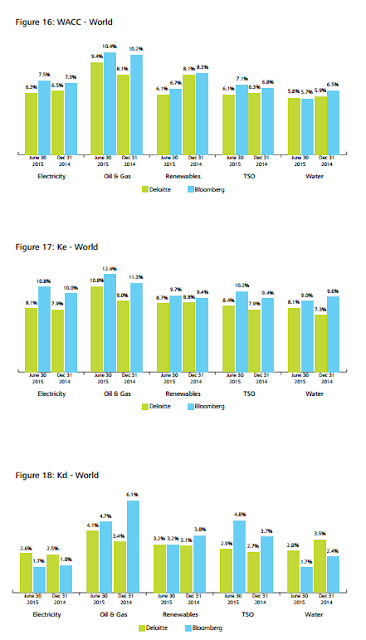 Well, for Turkey I've just come across a WACC calculation by an energy expert for Turkish energy industry. While a sector-wide figure may be misleading for specific companies this may be a good starting point for investors and analyst to compare countries and sub-sectors in the industry -just don't forget to add the 20% corporate tax in your calculations. 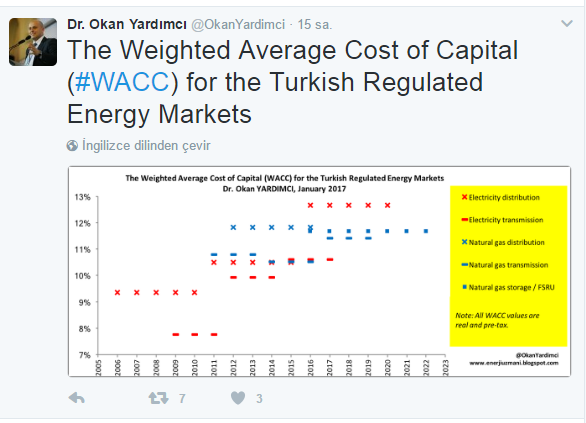 PS: Also check this nice tool to give info about country industry WACC calculations that you can adjust the assumptions.

Two of the leading distribution and retail suppliers in the Turkish electricity market, Enerjisa and CLK, are under investigation by the TCA.
According to the official press releases the main motivations behind those investigations are:
- For Enerjisa: Abuse of dominance through hindering competing power retailers and preventing the customers from switching suppliers and choosing other suppliers.
- For CLK: Abuse of dominance through discriminating behaviors and violating the unbundling rules.

Though the allegations seem different they are related to the article 6 of the Turkish Competition Law no. 4054 which forbids abuse of dominance.

The Turkish electricity market is in the ongoing liberalization process which started with privatization of 20 distribution regions. Within this process a retail market was created where distribution companies function as not only distributors of electricity -following regulated tariffs- but also as power retailers competing in the liberalized part of the market under unbundling rules and behind the "chinese walls" between retail and the distribution subsidiaries.

Within this process "the limit for eligible customer" is used as the main benchmark of opening the market to competition as it is reduced by the EMRA gradually letting the electricity customers consuming above this limit switch suppliers. The consumers under this limit are still obliged supply electricity from the default suppliers under regulated tariffs.

Both Enerjisa and CLK are distributors and default suppliers, which control electricity distribution regions comprised of a couple of cities, and also incumbent retailers competing with the other suppliers.

The customer switches in the liberalized part of the market were regarded as "low" by the TCA Market Study in 2015. A good summary is here.

For a good overview of the Turkish electricity market liberalization story, my previous post is here.
at January 30, 2017 No comments:

Booking.com expected to be back in Turkey

Just an update. In my latest post I've summarized two cases related to booking.com in Turkey. One of the cases which was related to a ...